This is Why I Think I’m Done with Online Dating

Recently, I had the opportunity to meet and interact with an intelligent, tall, handsome man my age… Online… eHarmony.com to be exact.

Over the past few years years, several people – including, more recently, my therapist – have recommended dating sites as a way to meet a potential “life partner,” since I’ve not had much luck with that in real life to date. Don’t get me wrong, I know A LOT of men who fit the bill – both in my religious/spiritual circle and co-workers. But (apparently) no mutual attractions…unless these guys are REALLY shy…and if they’re my age and shy, well… I’m not the woman for them.

So a few months ago I renewed my lax eHarmony membership and also joined match.com. (Two such sites should be sufficient, right?) I had a few “bites” and interactions on both sites, but nothing really blipped on my radar until this particular guy.

We went through a few rounds of the getting to know you questionnaires on the site and I was becoming cautiously optimistic. His answers in the latest round were quite nice and complimentary of my profile & photos…he’s attracted to me, yada, yada, yada… (Maybe I should’ve allowed my cynical side to the forefront at that point?) So when I responded with my answers to his questions, I naturally expected that we would venture into the next level of communication. Later that day, I received a notification that he’d read my responses. So I was awaiting his reply.

After a couple hours, I checked my messages and discovered that “he’s moved on.” The man obviously didn’t like something I said or the way I said it…would’ve been nice to know what it was…I’m not ashamed to admit that I took it personally (because, well, it WAS personal). I had already become emotionally invested in this guy I met online and knew next to nothing about. And then eHarmony proceeds to tell me something to the effect of: but that’s okay, because you’re closer to finding the one. (Way to be sympathetic, eHarmony.) 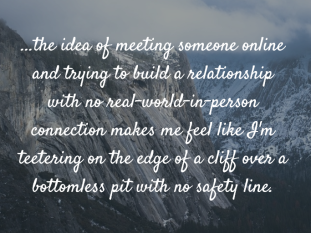 Really? Just because HE isn’t “the one,” doesn’t mean any of the other guys you’ve “matched” me with will be “the one” either. Frankly, the idea of meeting someone online instead of in real life and trying to build a relationship with no real-world-in-person connection – or worse, when a guy says “Hi, I like your pics. Want to get together this weekend?” (Umm…NO! Where’s the foreplay?!) – makes me feel like I’m teetering on the edge of a cliff over a bottomless pit with no safety line. (Dramatic, yes… Have you met me?) It’s enough to know that finding “the one” means putting a large portion of my happiness in human, fallible hands. (I have trust issues…just in case you didn’t figure that out already…) Sure, I have lots of online male friends – on Facebook, for example – whom I’ve never met in real life, but the potential is always there to do so someday. Meanwhile, we’re getting to know each other without the pressure of time. I’ve known people for whom the online introduction and relationship building has worked and is still working. But I have a feeling that, as much as the idea appeals to me (after all, it’s simply a modern, cyber version of mail order brides and grooms), I may not be one of those people for whom it works.

I’m not sure how I’ll meet “the one,” or if I ever will…or if there’s even “the one” out there for me. Any number of things may have happened to him…or he may not exist other than in my imagination…I may have to travel half-way around the world to meet him (which would be fine with me, actually)…he may be married to someone else (very depressing possibility). God knows I’d like to meet “the one,” partly (okay, mostly) because quite often being a single woman of a certain age (42, if you must know) with a healthy sex drive SUCKS EGGS. (Have you ever tried to suck an egg? Especially a raw one? Very messy and unsatisfying.) But somehow I feel that if he’s out there, I’m destined to meet him in real life rather than via a network of wires and Ethernet. Or at least, if I meet him online initially, I think it’ll be through a mutual acquaintance or some such.

I think I’m done with online dating. I prefer the “organic” method: letting events play out naturally, without forcing them. Maybe I’ll meet “the one” during a stroll in a park or down a sidewalk or in a bookstore. Until then, I’ll do my best to leave it in God’s hands (a big deal for me, because faith and patience aren’t two of my best traits…but since my first foray into marriage ended in disaster, I’m determined not to make the same mistake again)…which, when it comes down to the nuts and bolts, is really the best place to leave my future husband. 🙂

Have you ever tried online dating? If yes, did it work for you? If no, why not? Please leave comments below.