Depression: From the Inside Out

I usually consider myself a fairly up-beat person. If nothing else, my ability to find humor in the oddest places helps to keep me sane. Unfortunately, depression has ever-increasingly consumed my life lately. I’m not sure if it’s because, at 41, I’m closer to menopause – and all the symptoms (including increased depression) which accompany that milestone – or if it can be attributed to something else entirely. Perhaps it’s because I’m focusing – for the first time in my life – on speaking openly about and learning the affects childhood sexual abuse has on my mental and physical health, while at the same time struggling to raise (and understand) an adolescent boy who lives with ADHD and Asperger’s? I don’t know. Suffice to say, if I must suffer with depression, I want to be able to survive with my sanity intact. So, for me, that means talking – and writing – about it. From the inside. I don’t know how depression looks from the inside to anyone else, but I’d like to tell you what my depression looks like to me… 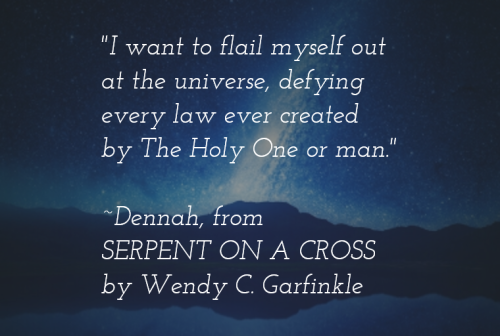 red runs through my brain. nerve endings are sensitive. everything becomes its own little Broadway drama. i shut down because if i don’t everyone will be caught up in the hurricane that consumes my mind. i don’t talk much. ocd feeds my depression. i suffer mostly with the obsessive part of ocd. if i tell you i’m “stalking” you & grin or wink, i’m mostly joking. but there’s a very real part of me that does obsess, does wish to stalk. to get as close as i can to you (that’s why they call it “obsessive”). but that’s illegal and people would have me committed, so i keep a lid on it. my compulsions aren’t usually anything useful, like cleaning the house. no, i’m compelled to count the letters and numbers on billboards, license plates and various other signage. boring and very, very useless.

when my obsession(s) is/are, for whatever reason, unavailable to me…either because i’m attempting to appear normal & sane, or because they’re just unreachable for a time, then my depression deepens. i know, insane, right? the irony is, i don’t know if these are symptoms of my survival of child sexual abuse or if they’d have been part of my personality either way. my abuser took my innocence and trauma rerouted the synapses in my brain before my personality could be truly known (although, my grandmother reportedly told my mother when i was just a few days old that i would be trouble. sooo…). i don’t really know who i am, who i’m supposed to be. some attempts at discovery (writing and editing) have met with surprising success. other attempts (marriage) have met with crushing failure. 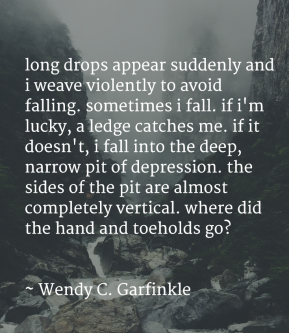 purple streaks bruise the darkness of my mind. The white-chalk Cliffs of Dover and long drops appear suddenly and i weave violently to avoid falling. sometimes i fall. if i’m lucky, a ledge catches me. if it doesn’t, i fall into the deep, narrow pit of depression. the sides of the pit are almost completely vertical. where did the hand and toeholds go? sometimes it takes a while to emerge. all the while functioning, attempting to be normal for the sake of those around me so they don’t wonder and ask what’s wrong. because i’m so close to tears at this point and cannot explain what’s wrong with me. because i’m not even sure myself. except that the demons have come out to play, to taunt me with what i don’t have with what i cannot have with what i am not with what i never will be. pushing them back behind the door at the bottom of the pit again and securing the padlock that hangs on rusty hinges takes all the energy i don’t have. i’m exhausted. and i cannot replace the lock, the rusty hinges. i don’t know how or where to find replacements.

my therapist sees the anger and the desperation and the depression and the despair and the darkness that lurk within. i try not to let others see. what will people think? i don’t know if this is para-menopause or if it’s just Wendy. is this depression and ocd or symptoms of something more? the one constant in my depression is music. not books, not people. music-mostly instrumental or few lyrics. this session of depression’s playlist (if you care to know) has been full of enigma’s a posteriori & love sensuality devotion, draconian’s a rose for the apocalypse & turning season within, really slow motion’s iron poetry, chopin’s nocturnes, imagine dragons’ radioactive (from night visions) and two steps from hell’s invincible (don’t really like their name, but love their music). i don’t know how long this bout of depression will last. it started about a week ago. the last one was on and off for the whole month of June (as in, 2 months ago). it pretty much has to work itself out of my system, i guess.

i become an automaton. i ask no questions. i don’t want to know. i don’t really care at this point. i struggle to care. i can’t people. i don’t adult very well either. i do my work and avoid people as much as possible. my focus is inward. i’m selfish. even my son suffers lack of my attention during this time. fortunately he’s mostly independent so i don’t have to worry about being arrested for child neglect. i just can’t people. too much drama. too many eyes. too many breaths. too many hands and fingers and feet and toes. too many smells. too many voices. too much noise. just. too. much. i’m a mass of nerve endings. i hunch inward around them. trying to protect them. because if you brush up against the wrong one, i might implode. i’ll fall apart. maybe not in front of you because that just makes people uncomfortable. but in private i fall apart. i try to keep the implosions to a minimum because they make the depression worse. there’s a lot of self-deprecation and self-flagellation and self-recrimination going on inside.

sometimes i want people to ask questions. just so i know they care. but they usually don’t know the right questions to ask. and i don’t know how to tell them which questions are the right ones. if i knew, don’t you think i’d answer them so i could go back to being me? sometimes i just want to be held. ask me what i want. what will pull me from this depression? what will work this time? i don’t know. i can think of a dozen things over which i obsess at various times, but will any one or more of them pull me from depression this time? i don’t know. i just want oblivion. want to slink into the cave of my room, cocoon myself in my bed and be one with oblivion. at least temporary oblivion. until this passes.

(The depression finally began to dissipate after about a week. I’m beginning to feel like my usual self again. But I know it will return. If only it would adhere to a set schedule, I could be prepared…)

2 responses to “Depression: From the Inside Out”