The legend of Baba Yaga has fascinated me since I discovered the Russian fairytale of Vasilisa the Beautiful, many, many moons ago. Vasilisa’s story shares basic commonalities with the Western fairytale of Cinderella: both lost their mother at a young age, their fathers remarried women who already had two daughters of their own, and both heroines were forced to work as servants in their own home. At this point, the stories diverge, each having its own unique qualities.

Vasilisa’s stepmother, determined to rid herself of her husband’s offspring once and for all, destroys all the lamps in their home and forces the young woman to visit Baba Yaga to request a light, knowing that those who entered the witch’s home rarely left it. But with the help of a magical doll inherited from her mother, her own innate honesty, and a little hard work, Vasilisa survived her encounter with Baba Yaga, returning home with the gift of a burning skull, which consumed the evil stepmother and her daughters, sparing Vasilisa.

Since then, I’ve been fascinated with the mythos of Baba Yaga. When researching Slavic mythology several years ago for my medieval fantasy novel, Serpent on a Cross, I again encountered her. This time, I delved deeper into her legend. 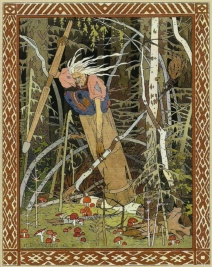 In most tales, Baba Yaga is portrayed as a hag who flies in a mortar, using the pestle as a rudder, sweeping away her tracks with a broom made of silver birch. She lives in a log cabin that balances on one or two chicken legs, surrounded by a disturbing palisade made of bleached bones, skulls perched atop each pole, some with rubies gleaming in the eye sockets. She’s a merciless, powerful witch, and depending which legends you believe, she’s also a Guardian of the Waters of Life and Death. THAT legend scintillated my imagination, as did the one that suggested “Baba Yaga” was more than one woman.

Thus, one of my secondary characters in Serpent on a Cross – Miraum – evolved into a Baba Yaga. In the incarnation of Miraum, Baba Yaga is a powerful healer and witch, but a mostly benevolent one. Her home doesn’t stand on chicken legs and while she’s ruthless, she’s not merciless, and just the current in a long line of Baba Yagas who serve as Guardians of the Waters of Life and Death. She becomes the mentor of my protagonist, Dennah, a young Jewish healer who’s recently discovered the unsettling fact that she’s a Weather Witch.

Serpent on a Cross is forthcoming from Booktrope, in print and epub re-release. I’m currently working on the sequel, Veil of Menace, where Miraum as Baba Yaga has more surprises up her sleeve. Stay tuned! 🙂