Once again I find myself grateful that my kiddo IS NOT a bus rider. No. I cart him to school each morning, and my mother is kind enough to pick him up each afternoon, pitching in with homework duty (she deserves a medal!!) until I arrive home from work.

With all the issues Broward County School District (that’s us) has had this new school year in not getting bus numbers & route assignments out to families prior to the start of school today, thousands of parents were forced to stand in line at the district bus depot this past weekend to try and get some answers. A friend of mine who has two daughters, one entering 6th grade, the other entering 8th, told me all they have are their bus passes. They don’t know the bus number or route. Her girls will just have to stand at the pick up and get on the bus that comes and sort it all out at school. Meh! 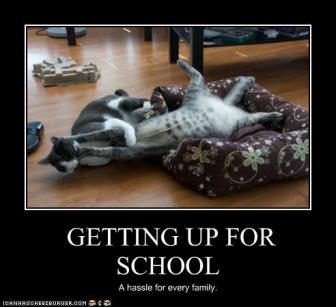 So even though the morning rush causes anxiety sometimes: lighting the proverbial fire under my son, who wears a uniform to school – thank God – packing his lunch – I think that’s going to become a do-it-the-night-before-and-store-it-in-the-‘fridge task – getting myself ready (whatever doesn’t need to be ironed and helps me look thinner than the scale says I am), and breakfast for both of us – he’s going to be fixing his own breakfast from now on and I usually eat when I get to work – I’m doubly thankful that I “get” to sleep until approximately 6:20 each morning, letting him sleep until 6:40, not having to rise at the ungodly hour of 5:00 to be ready for a 6:30 (or whatever time they pick up middle school kids these days) bus pickup. I know, I know, it wouldn’t BE so much of a morning rush if we both rose half an hour earlier – but neither of us are morning persons…er, people…. more’s the pity.

My poor child didn’t quite make it through it first day of middle school. In homeroom (a new term for me to add to my repertoire – I was in a private school & then homeschooled), he hyper-extended his left arm a bit while stretching (as confirmed by the doctor). He’s dominate right, but his left shoulder was bothering him enough that he couldn’t concentrate on his work. So grandmother was kind enough to pick him up early and take him to the doctor. So the rest of first day of 6th grade has been spent reading, drawing and otherwise being completely bored out of his video-game-loving mind. That oughta remind him to be careful next time he stretches in school. : – )