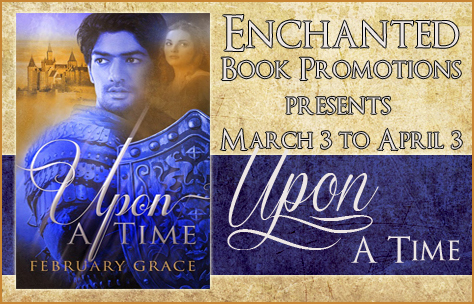 I’m pleased to host the very talented February Grace on my blog today, for the tour of her new book,

First, about the book: 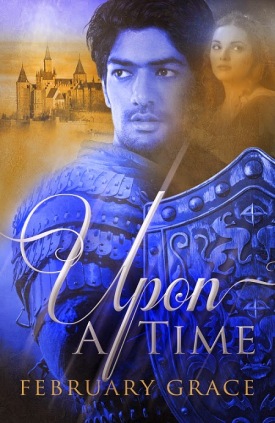 Genre: Fantasy / Fairytale / Romance
A blacksmith’s apprentice who would be a knight. The heir to the throne, at death’s door. One woman who would save them both, if she could…

Charlotte was number sixty-four in the second group of young, hopeful maidens intended to meet the Prince at a grand ball in his honor. That introduction was not to be. She returned home to her tiny village—and her visions of a future limited by it—without any warning of the drastic turn her life was about to take. Soon she would be fighting against the odds to help keep a gravely wounded stranger alive; and waging war with her own heart, as he stirred feelings in her she’d never known.

When the stranger’s royal identity is revealed, Charlotte is faced with an entirely different battle: one to keep her family, village, and the injured Prince in her care all safe from a madman set on taking the throne by any means necessary.

The Story Behind The Story

When I sat down and started writing UPON A TIME last year, I had no idea it would turn out just as it did, but I am so happy that it did.

I wanted, at first, just to put a spin on the traditional Cinderella story. Something different, swapping out the centuries-old heroine for another girl who would take the spotlight, without ever setting out, at first, to do it.

Then, the characters made themselves known to me, and I had the thought that the ‘retelling’ could be so much more than just that if I listened to them closely and wrote what was in my heart.

We live in a world that is so judgmental of people based upon their bodies: their outward appearance, and their physical strength and abilities. We glorify athletes and actors and models and worship them as the epitome of all that is desirable. We are taught from a young age that beauty equates to good in a person. Think about it; how often do you see a truly beautiful, truly evil villain? Usually if they are beautiful, in the end they are redeemable; and so not truly evil at all.

On the other side of the coin, those who are less than perfectly beautiful in these stories are often cast aside or worse, cast as weak and to be pitied, despised, or abused.

In this life there is so much more to people than just their outsides, and there is, or should be in my view, more to ‘fairy tales’ than just magic.

So I set about writing a story and when I was done I had something that was different: a Cinderella tale without a hint of supernatural magic (and this from a writer who previously wrote two novels all about the lives of modern fairy godparents!)

The “magic” in UPON A TIME exists in the hearts of its heroes, in the way that they selflessly come together to save a man’s life, not knowing at first the importance he had to all of theirs. The magic is there again when you see how that man takes to the new challenges that he must face, and rises above them.

I hope that this story will shine a new light on the people we imagine to be heroes, in stories and in everyday life.

If UPON A TIME makes just one person feel less self-conscious about their physical challenges or their appearance, then it will have been worth writing and going through the process of getting it out into the world. If it makes one person think about how they view others, it is worth it.

The true measure of a man—or woman—lies within their heart, not in the condition of their exterior shell; and the truest love and noblest souls can dwell within bodies that come in all shapes, sizes, and levels of physical ability.

February Grace is a writer, poet, and artist from Southeastern Michigan. She has created characters with clockwork hearts, told the romantic tale of modern fairy godparents, and has now put her own spin on a classic tale in UPON A TIME, her fourth novel published by Booktrope. She sings on key, plays by ear, and is more than mildly obsessed with colors, music, and meteor showers.